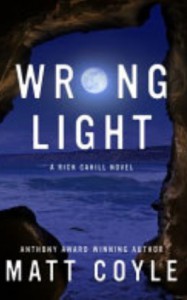 I received this ARC from NetGalley in exchange for an honest review.

Naomi Hendrix, known only as the sultry voice every lonely man listens to late at night, until... someone begins leaving threatening love letters and a promise of a union.

Rick Cahill is hired for her security at the local radio station, meanwhile juggling dangerous people from his past. Somehow he music do both and quickly before more people die but Naomi does not want the police involved, which makes Rick’s job more difficult.

The novel is about stalking, murder and crime.I love dark thrillers and this certainly did not disappoint. The action mostly takes place at night. Rick is constantly under threat of being killed by some Russian’s who are trying to protect a secret. There is a lot of action and murders throughout this novel. There is conflict and not to mention attraction between Rick, Naomi and the police.

How Coyle swichted between the two crimes is perfect while staying focused on getting Naomi and Ricks story out there. Love it