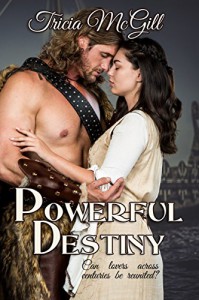 The Vikings were a greatly feared people, and they ranged far and wide. This was seen in how Ms. McGill explains Rolf in the first half of the story but when Rolf sees his "destiny" he realizes she's meant to be his although he is now her enemy and her captor. Brigid has to learn to accept the fate that has destroyed her life but offered her a new chance at happiness..

This story is all about reincarnation which is something I believe strongly in and is very warm to my heart. I just love how Ms. McGill explains everything in the story which is transcending.

Ms. McGill has a wonderful knowledge about vikings which sucked me into this book then did not let me go. In-fact there is no sugar-coating the horrors of the Viking raids and at that time, the raids were bloody and merciless. However, people of that time did not have the choices we have now. War and raids were a fact of life, especially along the coast.

The second part of the story takes place in modern times, when another Rolf, looking for a gift for his niece, bumps into a woman who seems eerily familiar, and he finds himself wondering if destiny, or fate, really does exist. A romantic fast moving book will sweep you away to another time and place then make you believe in a love ruled by fate. I'm pretty down with that and you should to.